There have been some questions lately on how my 3 year old daughter, Elliana, is doing 2 months after her surgery. I have been meaning to post an update and just haven’t had the chance.

My daughter is just one of many kids who have Lateral Rectus Eye Muscle Surgery and each child reacts differently.  Please remember that I am not an expert, just a loving parent, so this is by no means medical advice or how other children may react.

Our Ophthalmologist said that she appears to be adjusting harder than most and is struggling a bit.  I also just had a new baby (he is 3 months old) so the last 3 months have really rocked my daughters’ world.  She is now down to waking up with nightmares only 1 or 2 times every night and is having less bathroom accidents (Se was potty trained for a whole year prior to surgery)  Thankfully, her light sensitivity seems to have disappeared.  We have also started giving her temple massages, which seem to help relax her.

My biggest worry for recovery is that we would have to go in again for surgery.  We were told that 10% of our PO’s patients need to go in for “touch ups,” as the surgery is based on measurements, but each child’s eyes reacts differently.  They overcorrected her eyes because statistically, eyes will drift outward again following surgery.  Because of this, her eyes were crossing in a lot in the beginning.  They still seem to me to be inward, but the PO said it is because I am not used to seeing her eyes straight.  When her glasses are off (right before bed) her eyes are all over the place.  I am told this is normal.

Right now, I am still a little worried, but it seems like her eyes just need a little more time to get used to their new position.  The prescription in her stronger eye has changed from -1 to -3. I am told this is also normal as her brain is recognizing the weaker eye and making adjustments.  Here are some pictures to help tell her story. 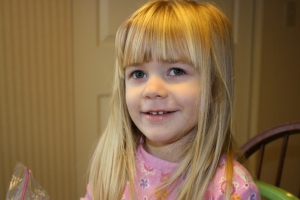 I promise she is usually smiling from ear to ear, but HATES to look at the camera. 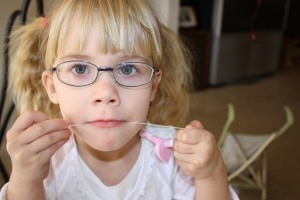 17 responses to “Sugery Update with Pictures”