I was looking at a picture of Zoe that we took Monday evening, and I think it was the first time I really internalized just how straight her eyes are now.  And I felt the need to share. 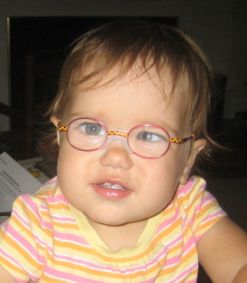 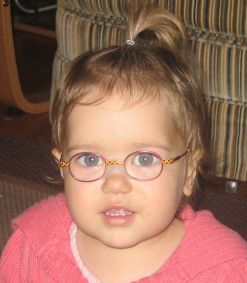 Oct. 5, 2008 - 6 weeks after the surgery. (the real miracle in this picture may be that daycare got a ponytail in her hair)

To say I’m relieved and pleased would be such an understatement as borders on ridiculous.   Just seeing her eyes so straight, and seeing her look at me through both of them is enough to get me teared up.  It was actually pretty hard to find a comparison photo from before the surgery because I never took pictures of her straight on because I knew her eyes would be crossed and I didn’t like how that looked.  I still believe that surgery should be a last option, and if her eyes had been straightened with glasses, we would have been very happy to continue with just glasses.  Since that wasn’t the case, I’m very, very happy that we did the surgery.

8 responses to “Update on Zoe”