I am so happy that I found this site! I need to vent.

My daughter’s pediatrician first noticed a crossed eye at her 9 month check up. But, she only saw it once and thought maybe it was pseudo strabismus. Of course then I started to notice it more and more-then at her 12 month check up they referred us to several Ophthalmologists. We chose the only Pediatric Ophthalmologist in the area and it took over 2 months to be seen.

The eye exam was torture!

Mckenna, now 15 months, does not like strangers to touch her. They put drops in her eyes and then we waited and waited to be seen again. Once we were brought back she didn’t want anything to do with the exam. After laying her down and holding her arms down, the doc peeled open her eyes to look at them. I have never heard my daughter cry like that! I make my husband take her to her vaccine appointments! But the minute he was done touching her she was ok. I was still upset- but she was ok. He said that we should try glasses and for me to look up the eye muscle surgery on his website. I was very confused at this point. I asked about an eye patch and he said that that was for vision- that confused me even more! We scheduled a follow-up appointment and in a whirlwind it was over. Later that afternoon, after I calmed down, I realized that I hadn’t even gotten a diagnosis from the PO! All I could process was that he said her eye is crossing in and that she isn’t using it or else she would have double vision. The sad thing is that I work in the medical field!! Well, I looked up everything I could about Strabismus and Amblyopia. Since the rx he wrote out was for +4 in both eyes, I concluded that she was farsighted. Also that since her eye crosses in occasionally, seemingly due to farsightedness I figured it sounded like Esotropia. I called the doc back the next day and turned out I was right- Left eye Esotropia (possibly accommodative). The only thing that leaves me wondering is that he said she wasn’t using that eye- but the consult note doesn’t say anything about Lazy eye. Also, she does move that eye- and today her left eye was straight and right was pulled in. He did however write the rx as +4 for both eyes- so it is quite confusing. I will trust him though. My husband wanted to pummel him however.

I really do not want her to have the eye muscle surgery. I did see successful stories on this site though, so that makes me feel better. But, with Accommodative Esotropia, I have read that if glasses work that surgery is never to be done. Also, that if the eyes do not become perfectly straight they still would not be working together and could revert back to crossing or amblyopia, that is why multiple surgeries would be required.

My daughter is pretty petite and the PO had specifics about the glasses she should wear. Zyl plastic with no nose pads. OK? So we took her to Sears Optical and they gave us measurements for her glasses (they did not have anything that small). So I stopped by a few places to no avail and then began my search online. Needless to say I had a few 4 a.m. evenings looking for glasses. The Optometrist said that the temple length doesn’t have to be perfect- If a wire frames he could cut and curve them into cable temples; and with plastic frames although he cannot cut them he can still curve them to cable temples to fit around her ears. That helped a lot!! I did not want crazy glasses for her! I found a very stylish pair at www.icframes.com and they weren’t terribly priced. Once I am sure they fit I will buy another pair for a backup. Nice thing is is that we are getting the lenses for free!! Sears HOOKUP!! I am anxious for them to come.

We have been practicing with tinker bell sunglasses for a couple of weeks now. We put them on and I tell her how beautiful she is and I clap. Then she hands them to me and I put them on- they look much better on her! Today she actually put them on and crawled around for almost a minute! They were slipping so I think then she remembered they were there and she took them off. With her fitted glasses, our hope is that they fit snug enough that she forgets they are there. She even crawled over to her play area and brought me the glasses to put on her the other day!

Here is hoping that she DOES wear her glasses and that they help her!!

I talk quite a bit and I have loads more to say so bear with me.

Thanks again Ann for making this site! It provided me with a lot of information in my search the first nights of concern and confusion!! 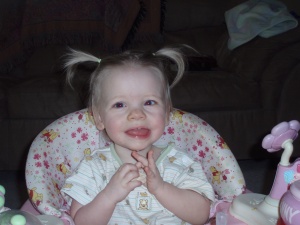