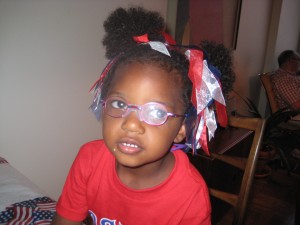 My name is Tobi and I am the mother of a beautiful, energetic and vision-impaired daughter, whom I will call Z.  This is the story of how we came to learn about Z’s vision impairment.  Unlike most of the visual issues you read about on this site, Z’s primary vision problems lie not with her eyes, or even with her optic nerves, but with her brain.  Her condition is called Cortical Visual Impairment (CVI), and according to at least one source it is the most common cause of permanent visual impairment in children.

Oh, and one more thing: children with CVI are frequently misdiagnosed as having autism spectrum disorders or mental retardation.  This is not to say that autism and/or retardation are never found in children with CVI.   It just means that often the symptoms and characteristics of children with CVI are confused by clinicians and therapists, and the children receive the wrong (or at least incomplete) diagnosis.
My husband and I adopted Z when she was 2 ½ months old.  She was rather small, but not premature.  We had no genetic or pre-natal information about her, other than that she came from an extremely poor country and probably did not get good prenatal care or nutrition.  Aside from a bad stomach bug when we first adopted her, she had no health problems.  During our first few months with Z, I often wondered if “something was wrong” – I couldn’t really put my finger on it, but she just seemed out of it most of the time.  She didn’t connect with us the way our son did when he was born.  She rarely smiled (except when you pretended to toss her in the air).  She rarely made eye contact.  She didn’t reach for objects or show much interest in the world (except in her big brother, who was about 3 at the time).  She didn’t roll over, and didn’t try.  She hardly engaged visually with the world, although when we’d carry her from room to room, or into a new place, she’d cock her head and listen intently.  For those first few months, we assumed that the trauma of adoption, even at her young age, explained these behaviors.

I remember on a few occasions wondering out loud to my husband, “I wonder if she can even see!”  But then she’d take visual notice of something – a spoon full of baby food heading toward her mouth, her brother jumping around and making funny faces at her – and I’d dismiss the idea that she had a vision issue.  To be honest, I was kind of hoping that she was blind, because that seemed a better alternative than cognitive impairment or severe attachment disorder or autism.  But the pediatric ophthalmologist said that although she had some visual acuity issues and strabismus, and she may need glasses, her eyesight was actually not bad. 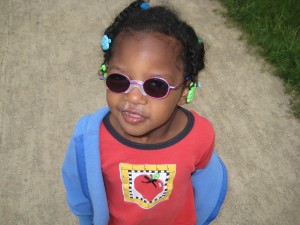 At about 13 months, she got glasses (so cute!) and a patch.  The glasses didn’t seem to help much, but soon she started walking (never really crawled), and a very lively personality started to emerge.  She got wonderful therapy and special ed services through the local school system.  All the while, I’m still thinking that something is really odd with her vision, things just don’t register with her, but the ophthalmologist, neurologist and pediatrician all just sort of shrugged when I would mention that and said it may simply be a cognitive thing (as in:  get used to it, your daughter is retarded).  And by the way, she never took to her glasses, which to me indicated that they weren’t really helping much.  In the meantime, Z was falling further and further behind her peers in just about every developmental area.  Although her personality seemed bright and curious, she never seemed to learn anything.  She couldn’t even feed herself.

When Z was about 2 ½ her special ed team said they wanted to bring in a vision specialist from the school system to evaluate her.  It took that woman (that WONDERFUL woman) about 20 minutes of observing Z before she said:  “I think your daughter has Cortical Visual Impairment.”  She proceeded to tell us what this is, which of our daughter’s behaviors she had seen that made her think this, and speculated (correctly) about other behaviors that she hadn’t witnessed but suspected appeared from time to time.

What a thrilling moment.  Someone finally said to us:  This is what is wrong with your daughter, it is a recognized condition, and even though it might not be curable, we can help her adapt and we can help her learn.  Hallelujah!

A couple months later, on our annual family road trip to the East Coast we stopped in Pittsburgh to see a CVI specialist named Christine Roman-Lantzy, PhD.  Dr. R-L had developed the diagnostic tool that is used to identify CVI and has written extensively on the topic.  During a 2-hour visit, during which Dr. R-L and a pediatrician observed and interacted with Z (and enlisted big brother’s assistance), she confirmed Z’s CVI diagnosis and talked to us more about CVI.  We had already read a lot about CVI by that point, but it was such a validating experience to have a conversation with someone who really understood, even more than my husband and I do, how our daughter experiences the world.  (I’m sure there are other good specialists out there, but we were extremely pleased with our visit with Dr. Roman-Lantzy – a very warm, caring and child-oriented professional.)

The diagnosis hasn’t solved our daughter’s vision impairment, but it has helped us (and her teachers) work with her.  We have learned that some characteristics of CVI may resolve over time, others will likely not, and so the lovely Z will probably go through life as a vision-impaired (and possibly legally blind) person.  We’ve been advised she should keep wearing her glasses (which she still protests), since she does also have an acuity issue – the glasses don’t help the CVI, but they at least improve somewhat the layer of blurriness that surrounds what Z does see.  We also don’t know if Z has a cognitive impairment, or if her delays are mostly attributable to her visually-limited and visually-confusing experiences to date.  Time will tell on that score.

Now, whenever people ask me about Z’s glasses, or comment on her constant motion, I tell them about her CVI.  I want people to at least have on their radar (unlike our own supposedly savvy medical specialists) the possibility of CVI for a child who “just doesn’t seem right.”  Here is what I’ve learned about CVI (in lay terms):

Children with CVI have a neurological disorder that can be caused by many things, including traumatic head injury, poorly developed brain, infection or lack of oxygen to the brain.  It used to be called cortical blindness.  It shows itself through ten (give or take) unique visual/behavioral characteristics:

Some other things we learned:  most kids with CVI have normal or near-normal visual acuity.  Also (but this is somewhat controversial), their visual preferences and behaviors may change from day to day, which could lead teachers and parents to believe that a child who is attentive and engaged on one day but not the next is simply “lazy.”  From my own observations, it seems to me that there are a lot of variables that play into Z’s visual engagement with the world – whether there is a lot of noise or other sensory input in her environment, whether she is tired or not feeling well, whether she feels successful or frustrated, etc.

Finally, people used to think that the brain doesn’t repair itself, especially with respect to vision.  But new research indicates that many parts of the brain support a person’s vision, and if you give them the opportunity – if you train the young brain to process visual input through other pathways – then you can positively change the outlook (so to speak) for the child with CVI.  Z is now 3, and we continue to work with her with the hopes of improving – or at least helping her adapt to – her unique view of her world.

So, that’s our (LONG) story!  I hope you learned something, and I welcome any comments or shared CVI experiences you may have had.