These are exerpts from Sue’s blog about her daughter Mia’s first few weeks with glasses.  Mia and her twin sister, Cate are 2 1/2 years old.  Cate does not need glasses, but Mia does. – Ann Z 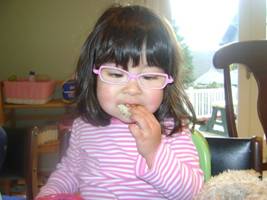 Mia in her glasses

I took Mia to the eye doctor today.   She was diagnosed as severely far sighted (can’t see things close up).  As a result, her brain and eyes are trying to compensate by focusing too hard up close, and it’s causing her right eye to wander and veer inward.  It’s very noticeable when she looks at you close up.  They recommend glasses.  She’ll be able to wear contact lenses around age 7, but will likely require corrected vision assistance of some sort, for life.  They don’t know what really causes this.  But the doctor felt that prematurity is certainly a common factor.  Thus, we’re getting Cate checked next week as well.

Mia was such a brave girl for most of the appointment.  She sat so well and cooperated way more than any two year old should, for a good hour or so.  At the end of the hour though, the doctor put eye drops into Mia’s eyes to dilate them.  Mia was surprised and scared, as we had to hold her down on the floor to get the eyedrops in.   The doctor then wanted to have us come back in 20 minutes, which is how long the eye drops take to work.  When we returned to the doctor’s office, Mia wanted nothing to do with it anymore.  She just kept saying “no, no, bye bye, go home”.  She kept covering her eyes with her hands and was crying and just beside herself.  She was in no sort of mood to select or get fitted for glasses.  She napped like a charm this afternoon, but was squinting for a couple of hours even after her nap.

Tonight, when Chris came home, he brought her a little puzzle toy as a gift for being so brave.  When we presented it to Mia, we told her that she did such a good job at the eye doctor.  We also said that we recognized she was scared there and that it wasn’t fun for her.   She repeated the word scared several times, as she put her puzzle together.  “eye doctor”…”scared”, “scared”…. So heartbreaking.  I’m so proud of her though.

Now comes the hard part.  How will she handle wearing glasses?  And as she gets older, how will the other children treat her?   Will some children make fun of her?  What will the impact be on self esteem?    I know that it’s Chris and my job to make sure we raise a confident, high esteem individual, but children can just be so cruel sometimes.  Maybe there will be no impact at all?  I got my glasses when I was 13 years old.  No big deal.  I got contacts at age 15.  I still wear them today.   But Mia will likely not remember ever not wearing glasses or having some sort of corrected vision.

I am sad and worried for my little Mia.  We’re going to have a “glasses” wearing Thanksgiving get together this year.  The whole extend family will wear glasses that day for encouragement, and for their love for Mia.

I prayed the last several nights, that Mia would be ok at our follow up eye doctor this morning.  She got fitted for new glasses today.  We tried (attempted) to put on a few wire rim selections on, but no luck.  She refused to put them on.  Finally, she reached for these pink plastic frames, that look almost exactly like mine.  She actually put them on herself and wore them for about a minute.  Progress.   We tried a couple other pairs, but no dice.   Here is a picture of the one below that she picked out herself.   I think they’re actually quite stylish.

I guess it’s not a huge surprise that she chose a pair that looked familiar (just like Mommy’s.. mine are more burgundy colored though).  I’ve been wearing my glasses for the last couple of days to encourage Mia to be comfortable with the idea of wearing them.  These were actually pretty expensive.  Microsoft covered only about 50% of it.  But I thought, if my little girl has to wear glasses, she might as well look good in them.  They’re suppose to be made for children, non breakable lens, flexible frames, etc…, but boy, I hope we don’t lose them or break them.  They’re going to modify the ends so that they curve and fit completely around her ears.

I think it’s going to be an uphill battle though.  Mia is not going to understand why this is so important.  The doctor said she has a +8 prescription.  This is severely farsighted.  The doctor said that over time, the tendency for her right eye to go cross eyed should go away.  If it doesn’t, we’ll then start down the vision therapy path.

My poor Mia.  I really feel for her and it truly breaks my heart.   What is her version of the world?  What is she seeing w/out her glasses?  They are so thick and the prescription is so high.  She had literally adapted to her version of the world.  Today, our second day with glasses, I let them watch Thomas the Trains on demand.  She immediately sat on my lap (with her glasses on), and said “owie”.  This is what she says when she’s scared.   She correlates “owie” with being scared.  I realized that this was the first time she was seeing Thomas on the big screen TV.  It was so new to her, that it initially frightened her.   She got use to it soon enough, but it just makes me realize how different her world must be now.

She is doing better than I expected.  She will wear them about 50% of the time that I attempt to put them on her.  Our rule is that if she watches TV, wants to read a book, or leaves the house, she needs to wear her glasses.  She take them off after about 5-10 minutes.  Though tonight, she actually wore her glasses for increments of 20-30 minutes.  Progress…..  I don’t expect her to be use them and wear them for longer durations until probably several more weeks.

I have low expectations and I am preparing myself for a long road and ask God for extreme patience.   I do NOT want this to be a traumatic or negative expereince for her.  She needs to know that wearing glasses is important for her, and for her parents.  It is not a toy, and she needs to treat her glasses with respect.  We are trying to gradually teach her how to be gently opening them and putting them on.

I’m wearing my glasses in front of her now.  I rarely wear mine, other than at night in bed while reading.  They are uncomfortable (they slip down my nose) and after wearing them all day, my eyes are tired.  Glasses have always been a burden to me, but I’ve always used my contacts.   But my little Mia doesn’t have that option until she’s older.  If my eyes are tired and my face is uncomfortable, then just think what this must be like for Mia?  I sense that she understands that this is not a game and that this is important, but it doesn’t mean that it’s easy for her.  The fact that she’s being so cooperative, makes me so proud of my brave little girl.

My poor Cate.  I’m feeling so guilty about her lately.  Mia just demands more of my attention right now.  And it breaks my heart that Cate doesn’t have equal share of me right now.

Cream Cheese!  Otherwise known as “Christmas Trees”.   That’s how Cate says it.  She’s been so excited about Christmas Trees ever since she saw the holiday decorations at Macy’s a couple of weeks ago.  Today, we got our X-mas tree.  Cate absolutely LOVED it.  She was literally skippping back and forth in the house.  She was so enthusiastic about decorating.  And she was gleeful.   Do you ever remember being gleeful?  That’s the word I would use to describe her. . .

Mia liked the tree as well, but definitely not as into it as Cate.  To some degree, I think she was a little overwhelmed with it, given her new ability to see all the lights with her glasses.  In fact, Mia has been overwhelmed a lot lately by the newest version of things she’s always seen differently before glasses.  I notice her sometimes hiding her eyes or taking a step back.  She saw a couple of dogs walking by outside our window today, and she was a little bit afraid.  I think she’s adapting to how things look so different.  But she’s doing great.  She wore the glasses more today, than she was without them.  It’s our third day, and each day she’s been tolerating them longer and longer.  She’s doing great and I’m so proud of her.