After a few discussions on the Little Four Eyes facebook group about whether to be concerned about a glow in a child’s eye in photos (see “Know the Glow” for more information), Kristen shared a little of her son, Jayden’s story.  I asked if she would like to share more of his story, as I agree with her on how important it is to increase awareness of retinoblastoma.  Many, many thanks to Kristen for sharing Jayden’s story, and many good thoughts and prayers to Jayden and his family as they finish what they hope is his last round of chemo.  – Ann Z 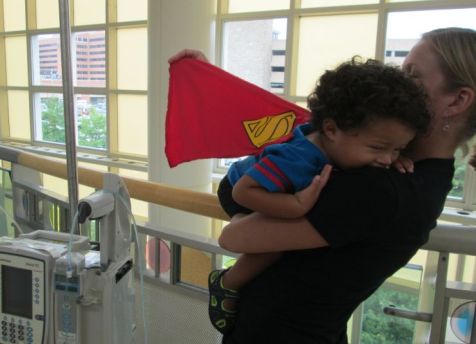 On Thursday night, I noticed both of Jayden’s eyes were puffy so I gave him some Benadryl. Friday morning Jayden stopped eating and drinking and only wanted to be held and slept while someone held him. Very unlike Jayden, a vibrant and silly toddler who eats everything in sight and hates naps. That day I called the nurse line and emailed his pediatrician and they thought it was just a virus and to keep an eye on him. Saturday I made an appointment and the doctor on call didn’t look at his eye because she didn’t want to irritate him. She told me not to give him any pain reliever to see if he broke a fever, telling us it was a virus. Sunday morning, his eye was swollen shut and 3 times the normal size. I rushed him to the ER and we were there all day and they finally told me he had a “calcium deposit”. I didn’t know that meant a tumor that was cancerous. We were admitted to the hospital that night. The next day they did an exam under anesthesia, Monday, July 15th of 2013 I was told he had Retinoblastoma. 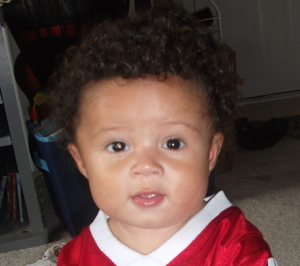 At 6 months, a difference in reflections is noticeable in pictures.

Retinoblastoma or Rb is caused by an abnormality in chromosome 13 which controls retinal cell division. It affects 1 in every 15,000 to 30,000 babies born in the US. Retinoblastoma is a fast growing eye cancer affecting babies and young children. Tumors may form in one eye or both and can spread outside of the eye. This cancer typically develops before 3 years of age.

There are two types, hereditary or spontaneous. In October of 2012, I started noticing a different reflection in Jayden’s right eye in pictures that I took. When I brought up my concerns to his pediatrician, he felt it was just the flash from the camera. Later I would learn that this white glow in his affected eye is called “leukorcoria” and was a definite sign of the tumor. A couple of months after, I noticed that one of his eyes was lazy so I asked again about his eyes to his pediatrician and he told me to go to an ophthalmologist if I was concerned. A week later, he got sick.

From everyone thinking it was pink eye to all of a sudden the cancer word? WHAT? That week in the hospital was a blur, I didn’t sleep, tried to digest everything the doctors, nurses, and social workers were telling me, learning new medical terms and trying to keep all of his 13 meds straight… I was running on adrenaline. Jayden got diagnosed at 15 months old. The surgeon told me that the size of the tumor was so big that Jayden was already blind in his right eye 8 or 9 months earlier. I never suspected anything, he met all of his large and small skills at target or even earlier. I felt like the worst mother ever. The day after the exam, he had another MRI and CT scan, surgery for his port and a spinal tap. Since there was controversy if the cancer had spread beyond the eye orbit and onto the optic nerve, they decided to chemo first and then remove they eye. On the Thursday after his diagnosis, he started a high dose of chemo treatment. The plan was to do 2 days of the high dose chemo for 2 rounds (28 day cycles). Then after his eye calmed down with the steroids and other meds, he would have his eye enucleated (removed). Then they would decide to do more chemo or if we were done.

For 2 months, Jayden was a different kid until his eye came out. He stopped talking, eating and being social. He would lay and scream on the floor in pain, nights we wouldn’t sleep just try to rock him or watch “Mighty Machines” to keep his mind off the pain. Finally we got him on pain meds a month after his diagnosis and he was a little better. He was on Oxycodone every 4 hours, just to give you an idea of the pain he was in. OH, and let me tell you that “roid rage” is very real. A toddler on steroids is a disaster! One minute he would be content playing with his truck or tractor and the next minute he would throw “Corey Combine” across the room and start hitting the air! He would fall asleep with his snack cup and wake up at night and want a snack. It took me many nights of no sleep to realize that a blueberry waffle or cereal bar would make him happier. His beautiful brown curls were also falling out and always in his face. He would rip it out himself and hand me clumps of curls. We buzzed it and it was an emotional haircut for both of us.

The superhero shortly after his enucleation.

Jayden was getting daily Neupogen shots to help bring his counts up faster, but they also hurt his body. We did 4 cycles and then during the 4th round of shots, he had a huge allergic reaction. He also had an allergic reaction to one of his chemo meds, the Etoposide. Now he gets Benadryl before chemo treatments. Jayden is my super hero, he wears Super Man shirts and capes to his big days at the clinic (EUAs, chemo, transfusions). He has fear and anxiety of nurses and doctors. All of the port accesses, bloodwork, eye exams, and chemo treatments are traumatic for him. September 16th was his enucleation and the surgery went well and 2 days later, my happy boy came back to me. He was back to being Jayden, he started laughing, talking, eating, and playing again. My heart was so happy. Those 2 months of pain were the hardest, nothing I could do could make him happy. Who knew I would be so happy to have my son’s eye removed? After surgery, they placed a clear plastic lens in it called a conformer.

After surgery, his MRI results were sent to COG (Children’s Oncology Group) RB Commitee, the US experts to decide if he should continue chemo or if he was done. After some waiting, the Rb experts saw some “suspicious cell areas” on Jayden’s MRI scan. One of the experts examined the atypical cells and they may or may not be residual Rb tissues. The tissues were behind the eye globe close to the optic nerve. 4 more rounds of chemo was decided.

After enucleation, I patched his eye when we went out. He hated it and it ripped off his skin. He has glasses that he needs to wear now but hates them and we are trying to master this battle. He needs them to protect his good eye from harm. We received his first prosthetic eye right before Christmas, the best Christmas present ever! I cried after seeing how real it looked, now people wouldn’t stare at my child like he was an alien. His latest MRI looked good and he has another EUA in January to examine his eyes and another round of chemo the second week in January (hopefully his last one). We are also still waiting to hear back on his pathology, to see if it’s hereditary or spontaneous. Praying it’s the sporadic/spontaneous kind. 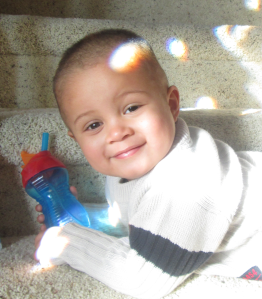 We are hoping we are seeing the light at the end of the tunnel. He is doing well and is a fighter. He inspires me to be strong and brave. He has been through so much and yet is happy and cheers others up. This morning we were waiting to get bloodwork and he was smiling and waving to everyone going by. For a couple weeks after chemo, his ANC (infection fighting) counts get really low and is neutropenic so we basically stay at home and can’t really go anywhere or be by groups of people. If he would get a fever when he is “neutropenic” (counts 500 or lower) he would be hospitalized for 3 days with antibiotics. Cancer doesn’t slow this boy down! His depth perception is off since he only has one eye, so we are trying to work on that. Every night we say our prayers and he holds my hand and we pray for all the other brave children who are battling cancer. Spread the awareness! If you would like updates, you can go to Jayden Hebberth for his facebook community. Thanks for listening. Shine on.

Update February 9, 2014:  Kristen shared some fantastic news!  Jayden’s MRI came back clear, with no signs of cancer growth. No more chemo for Jayden, his port will be removed soon!

It’s Ann again.  Please do help spread the word about the importance paying attention to those photos and knowing the glow.  A white or golden glow in the eye in a photo is one of the early signs of retinoblastoma, but it is not always an indicator of retinoblastoma: it may be nothing at all, or it can also be a sign of many other vision disorders, including amblyopia, astigmatism, cataracts, and more.  If you are seeing a glow in your child’s eye in pictures, please make sure to get it checked out!  – Ann Z