Ever since my book project was funded on Kickstarter (almost exactly a year ago now), I try to keep an eye out (pun intended) for other crowdfunded projects that would be of interest to our community. There are two projects that are currently running that I wanted to let you all know about: 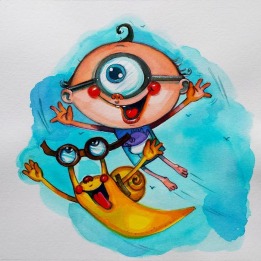 “The Best Day Ever” is a children’s book about two good friends, a little cyclops named Ben, and his snail buddy, Sid.  When Ben starts having strange things happen, his friend Sid decides to do some detective work to figure it out, and realizes his friend needs glasses.  Author and illustrator, Anna Rafailov, “Annie,” got the idea for the book when her son needed glasses and she found that herself drawing a story for him to explain what was going on.  The book focuses on friendship between two characters that are very different, showing that a true friends don’t care how do you look, as long as you have great time together and help each other when in trouble.  The illustrations for the book are amazing!  Anna’s Kickstarter campaign for her book ends on Friday, Dec. 19. 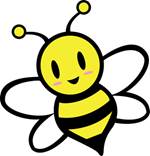 GeoBee is a game designed by Dr. Charles Boulet, BSc, BEd, OD, a developmental optometrist, author, and educator.  The game is based on principles of vision science and rehabilitation to reinforce spatial awareness, motor targeting, visual memory, letter awareness, response time, and mental focus.  The game is scheduled to release in February, and backers of the project  can receive substantial discounts to the annual subscription costs.  The Indiegogo campaign for GeoBee ends on February 1, 2015.

3 responses to “Crowdfunding projects: a children’s book and computer game”