This post comes from Danielle, who’s daughter, Mia, had a cataract in one eye.   If you’re new, you may also want to read Mia’s story and update. – Ann Z

Our daughter Mia just received an occluding contact lens that she will use as a means for patching her left eye. She began wearing a patch when she was 2 months old and once she turned 3 months old we began having problems with her screaming and rubbing the patch until she was able to remove it. We have tried stronger adhesive patches that caused a rash on her face and was starting to remove her eyebrow. Her PO suggested makeshift arm splints and we flat out refused to restrain our daughter. After we exhausted most of our options, and with consistent nagging and persistence, we finally got her the black occluding contact lens. 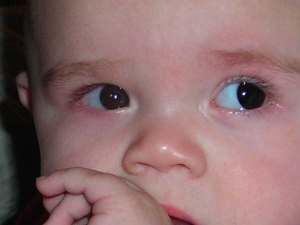 The lens is just like a regular contact lens and needs to same care. When the contact lens is in her eye it completes occludes her good eye and works exactly like a regular patch. Our daughter was born with a unilateral cataract so when she patches her good eye it must be completely occluded; we could not use atropine drops as a method for patching. Mia received her lens yesterday and we began using the lens this evening. We were able to get over 2 hours of straight patching in; which is the longest she has had her eye consistently patched since she was about 3 months old. Mia is really good with people fiddling in her eye so she was pretty good for us when we put the lens in, however it took 5 tries before we got the lens in her eye. She also has brown eyes so the lens is not very noticeable.

If there are any parents that are having as much problems as we have had, please ask your doctor about the black lens. I have read up on the occluding lens and I have heard that the success rate is much higher than a regular patch. 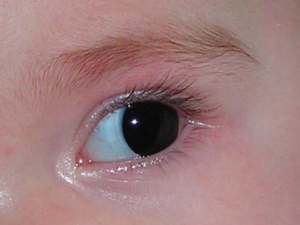 close up of the lens on Mia's eye

3 responses to “occluding lens for patching”