Yesterday in our facebook group (if you’re not a member, you should be!), Jessica shared an upsetting story which she gave permission to share here.  She was with her son in the waiting room of their eye doctor.  Another woman was there with a young boy, and the woman told the boy that if he didn’t behave, he’d have to wear an eye patch like the baby (“the baby” being Jessica’s son).

I’ll let it sink in just how awful a comment like that is.  First that anyone would essentially accuse someone of putting an eye patch on their child as a punishment, is horrid.  But if that young boy ever does need to patch, he now may think it’s because of something he did and be far less willing to comply.  I’m happy to say that Jessica responded well and explained why her son needed to wear a patch.

The story inspired another member, Kristin, to create a new pie chart, which reflects why a child might be wearing a patch.  It’s a bit different from another chart about patching that I’ve seen around. Kristin’s is far more accurate: 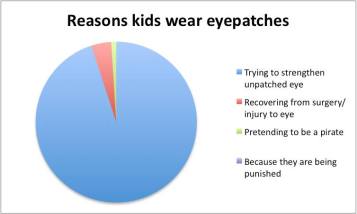 So I asked for a second chart that outlines reasons why a child might be wearing glasses, in response to all the questions we get about whether the glasses are real.  Kristin happily provided one:

I should note that the pie charts are for illustrative purposes only and are not based on real numbers.  I actually have no idea how many kids may be playing dress up with glasses or eye patches at any given time.  I hope none are ever wearing them as punishment!