Last month, we saw that Zoe’s favorite TV show, Yo Gabba Gabba (warning, the page is a little, um, flashy) was having an episode where one of the main characters gets glasses. I was excited to watch the show with Zoe and see how she reacted to a familiar character getting glasses.  She happily pointed out the glasses, but I ended up disappointed. The show was all about differences, which was fine, and had the character Muno finding out he needed glasses to see well, he was excited about them, until his friends said he looked strange. Then they talked about how you need to be nice to your friends. Zoe’s still young enough that none of the kids at daycare would tease her about her glasses, though I know she’ll get it soon enough, so it wasn’t really what I was hoping for. But that’s not what bothered me the most. The worst was that the very next episode — no more glasses for Muno! I know it’s just a kid’s show, but that really bugs me, why can’t they have that character wear glasses in future episodes? What does it say to kids who wear glasses to see a character wear glasses – because he can’t see well – and then have that character never have to wear glasses again. Not the best thing if you’re trying to convince your kid that they’ll need to wear glasses everyday.

I guess I just want a show to have a young character with glasses that become part of their normal day to day life. I wouldn’t mind having an episode that talks about why you wear glasses, or how to deal with the teasing, but mostly, I just want to see glasses portrayed as normal – since that’s what they are for our kids – normal. I know they must be out there… 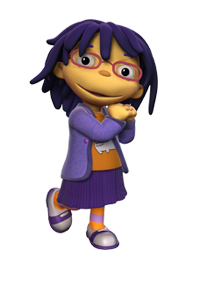 May from Sid the Science Kid

Motherhood and potatoes wrote about a recent episode of the TV show “Sid the Science Kid” about glasses and vision. The show is pitched at preschoolers, which is still a little above Zoe’s level, but not too far.  The episode is Grandma’s Glasses, in which Sid tries on Grandma’s glasses, but they make everything look blurry. He then learns about vision and how glasses can help some people see clearly, even if they make the world look blurry to others. Even better, I checked out the website for Sid the Science Kid and saw that at least one of the kids on the show, May, wears glasses, though I don’t know how often her character appears. 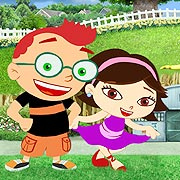 Leo and June from Little Einsteins

GeorgeB also wrote in to say that their latest and greatest find is the Little Einsteins. One of the main characters, Leo, wears the very obvious glasses with the big moon eyes. It is rewarding on many levels (educational, good tv) but by far and away, positive in that it depicts a child in glasses without highlighting the glasses. Leo just is..doing his thing in his favorite rocket ship. A passive, yet very positive affirmation.

What other characters with glasses have you all found? Or, have you run into other disappointing story lines about glasses?

13 responses to “children and glasses and TV shows”