The new frames arrived today!  Given that Zoe’s old frames were holding on by a bit of electric tape and a prayer, it was welcome news. I decided to take Iris’s suggestion, and the old glasses are now in Zoe’s memory box.  I think it’ll be fun to look back years from now, at just how tiny those glasses are.

I had naievely assumed that since Zoe had been so good with her glasses, that the switch to the new frames would be an easy one.  I forgot a few important points: 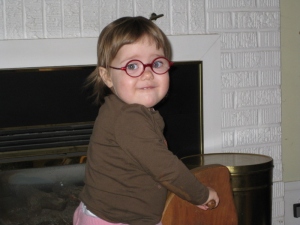 She wore the red pair home from the glasses store and then took them off and refused to wear either pair.  I was afraid we’d be in for another week or so of getting her back to wearing glasses.  We let her eat lunch without glasses, having learned that fighting with a hungry toddler is an exercise in futility.  After lunch, we let her examine the new glasses and clean them.  Then the grandparents arrived, they were very upbeat and asked Zoe to show them her new glasses.  She’s been wearing them happily ever since.  Yay grandparents!  She’s switched between the two a couple of times each day, yesterday and today.  She’ll have to choose just one for tomorrow.