Corrie, a regular commenter, sent in her daughter Ellie’s story. (Interestingly, both Amomofelly’s daughter and Corrie’s daughter are named Elliana). If you’d like to share your child’s story, please email me ann @ shinypebble . com -Ann Z

Ellie's eye turn before her surgery

So, I have been writing some comments here, now it’s time that I introduce our Elliana to you.  Ellie was born with infantile estropia (inward turning of the eyes).  At her two month check-up, the pediatrician thought that it would be a good idea to see a PO to have her evaluated.  I was a little skeptical as all babies are born crosseyed, and Ellie was still so little, but I didn’t want to miss anything (we had just discovered that I had missed a hearing loss on our two-year-old), so I decided to make an appointment.  The eye doctor checked her out and told us to come back in two months. 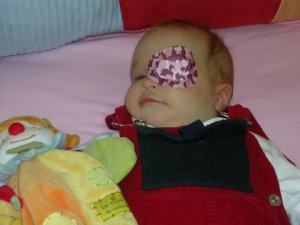 The next time we came back, the PO told us to start patching alternate eyes two hours a day and be back in two months.  We did that, and then she started talking surgery. I was completely overwhelmed because we were going through some serious testing with her older sister for an undetected hearing loss and subsequent speech delay, so I didn’t even know where to start researching about what to do with Ellie.  I decided to get a second opinion, and made an appointment at a PO at Emory Hospital (a big university hospital).  After they had us wait for a very long time, they dialated her eyes and made us wait with the eyes dilated in a room with very bright light.  I was not very impressed, to say the least, but I came here for a second opinion, so I was going to get it.  When we were finally seen again, they told us that yes, Ellie needed surgery.  So, we scheduled surgery with our other PO.

Ellie was 9 months when they did the surgery.  I agree with all of you that have gone through it that the getting out of anesthesia part was the worst thing about it.  I was not allowed to go into the room where they put her to sleep because I was 6 months pregnant with our third daughter, but thankfully a friend was able to take her in there, and she did really well.  The PO operated for 1.5 hours on both eyes.  She came out of the anesthesia just beside herself.  Thankfully, I was still nursing her, so she was able to nurse right away and she quieted down right away and kept nursing while they took the IV out of her foot.  She screamed the entire way from the hospital to our friend’s house where I picked up her sister, to our home in rush hour traffic in Atlanta (yikes!!).  It was heartwrenching, but I had to get through it and get them home.  She pretty much needed to be held the rest of the day, but the next day she was back to her happy self… actually I think she was happier.  She could finally see things that she had never seen before.  It was AMAZING!  Up until this point, both of her eyes always pointed to her nose.  I don’t think that she ever saw anything beyond that.  She always studied her fingers.  We always teased that she was born with a diamond ring on her finger as that was all she ever looked at.   Her eyes were perfectly straight right after surgery.  The inside of her eye was red, and we had to put in eyedrops for a while, but we had no complications.

When we went in for her two week checkup, the doctor was very pleased and told us to come back in a month.  Before we even went back, I noticed the left eye drifting in to her nose again.  At our next checkup, the PO noticed it too, and told us that we needed to get glasses.  So, we got glasses.  The next time we went back, we had to start patching again, 6 hours a day.  Ugh… I was frustrated.  We followed the orders until the summer came right before Ellie turned two, and because our Ellie sweats so easily and the patches wouldn’t stay on, I decided to give her a break from patching.  We got a new prescription for her lenses after the summer and started the patching again. We have been at the PO every two months for over two years now, but have not been able to improve vision in her left eye that’s still turning in.  She can actually make that left eye almost completely disappear.  It’s scary!   Finally, our PO wanted us to see the doctor that is the head doctor over the group that she is a part of for a second opinion because a second surgery is not recommended unless the weaker eye improves to at least the same level as the better eye.  So, we had a second opinion from him, which didn’t give much hope either, we only changed the prescription in her left eye slightly.  I am still waiting on the new glasses to come in.  In the meantime, I have started vision therapy with her.  Our PO didn’t think that vision therapy would help her, but in my opinion it also does not hurt her, so if what we are doing isn’t working, I might as well give it a try.  I don’t know officially that there has been improvement as we are not scheduled to go back until May (since our youngest daughter needed a follow-up appointment then), but judging from her performance as we do these “exercises” every day for two hours, I think she can see a lot better than she used to. That’s the story of our Ellie.

Ellie today in her patch and glasses

I made her a tree poster, with lots of empty branches. Every day when she takes a patch off, she attaches it to a branch: after all a tree cannot be naked. Every time she fills up a branch, she gets a special treat.

10 responses to “Your stories – Introducing Ellie”