Melanie brought this up on the facebook page, which reminded me that I’d wanted to write about this very thing.

A couple of weeks ago, we were out shopping for more shirts for Zoe, since she’s recently gone through a growth spurt.  We went in to Children’s Place, and Chris immediately noticed a shirt with a drawing of a girl’s face wearing sparkly pink glasses.  He pointed the shirt out to Zoe, who was also taken by it.  I rifled through the pile to find the right size, and picked it up and my heart sank. 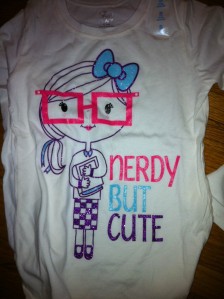 When we first saw the shirt, we’d only seen the face, not any of the text.  The word “nerdy” hit me in the gut.  Especially since it was clear that the very bright glasses were tied to that word (both are even in pink).  But I was torn, I wasn’t sure how to address it with Zoe, who was still excited about the shirt, and I kept thinking maybe I was being too sensitive.  Long story short, we came home with the shirt, though Zoe hasn’t worn it yet, and now I’m not sure I want her to.  I know that in some ways, nerdy is considered cool now, but I hate that glasses are tied in to the nerdiness.  Glasses have nothing to do with IQ or social awkwardness, or anything other than difficulty seeing without them.  I had thought maybe we were past that – that glasses are common enough that they aren’t seen as a symbol of the nerd.  I loved Melissa’s point in her Eye Believe post about how J.K. Rowling gave her hero glasses, rather than the smart girl or the nerd.

So what do you think?  Do glasses still equal nerdy?   What other non-nerdy characters (especially kids characters) wear glasses?