Huge thanks to Melissa for sending in this post, which covers one of my favorite topics: self-portraits of kids in glasses.  It ran originally on her blog, A Boy, His Brother, the Mischief they Find.  – Ann Z

The kid in the green glasses.

Just as it always does, the artwork hanging outside the classroom caught my eye. I began scanning the pictures looking for his name, not noticing the details of the pictures at first. Upon closer reflections, I realized there was a jumbled mess of “the same”-eyes, peachy circles, blobs of hair.

“Maybe he didn’t do one,” I thought. “It must have been a project on a day he wasn’t here.” 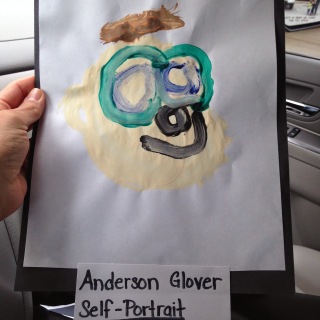 My heart skipped a bit at this face.

That is my kid; The kid in the green glasses is mine.

Every single other picture could be any kid in the class-2 dot eyes, a line of hair, routine kid faces.
But, there is no mistaking those green circles.

“He did a great job, didn’t he?” asked the teacher. “He really captured himself.”

Did she feel what I did?

HE DOESN’T HAVE A PATCH ON IN HIS SELF PORTRAIT.

And, he is very proud to be rocking some awesome green glasses.

This will be framed, in my house, for the rest of my life.

I am so crazily torn up about this picture because I had no inking that we would ever be at the point* where we are now.

*The point=patching vacation, “guaranteed success”, amazing because my kid doesn’t even see the patch as a part of who he is.

Please remember that the first PO we saw flat out said, “He will never be normal” in reference to my baby son. “He will never see well out of his left eye, he will probably not drive & he will always wear incredibly thick lensed glasses that make him look like a bug.” (She did no say the bug part, but she might as well have said it because that is what everyone was thinking) I still shudder at this woman who very clearly was not a mother because WHO SAYS THAT TO SOMEONE?? 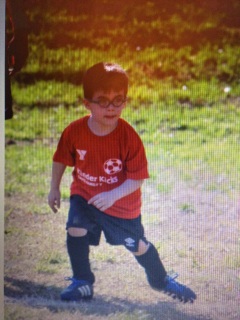 It turns out I was right.

“That kid in the green glasses is fearless! He would run through a brick wall if he needed to!” was a comment I overheard at a soccer game.

Followed by, “Watch how fast that kid in the green glasses is when he runs.” 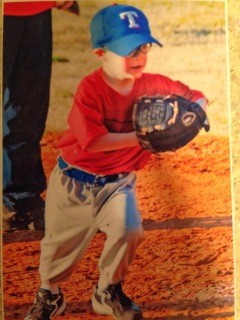 And, then there were the comments at t ball.

“You have to be quick when that kid in the glasses is around if you want to get the ball.”

“I think that kid in the glasses is going to get the ball every time.”

I didn’t quite (ever in my wildest dreams) imagine that these would be the “glasses” comments I would hear.

Clearly my kid’s ability to occasionally get the ball at a “game” is not any indicator of his later success as an athlete or scholar or non-nose picker, but it is an indicator that he is beyond amazing for overcoming a significant vision problem, access to only one eye for the majority of his life and, let’s be honest, a neurotic mother.

I am so proud of him.

3 responses to “Your stories: The kid in the green glasses”