June is Cataract awareness month, so we’re featuring stories from families that have dealt with pediatric cataracts.  Many thanks to Melissa for sharing her update on Anderson!  You can read more of Melissa’s writing at A perfect boy, a not so perfect eye. – Ann Z

In honor of Cataract awareness month, I wanted to share some thoughts about where we are in our cataract journey. My son, Anderson, is 2 ½ and has been patching since he was 11 months due to a unilateral cataract. It has been rough for all of us. This was originally posted on my blog, A perfect boy, a not so perfect eye.

We have entered a new phase of the Eye. To be fair, it is really quite relaxing as Eye phases go. Sort of a comical phase, if you will. Anderson insists on always wearing a green eye patch. Always. We have no idea where this tireless obsession/demand for, “A GREEN EYEPATCH! I WANT A GREEN ONE!” came from, but it has been going on for a few weeks. The night before “a few weeks ago” I ordered about 200 patches, only about 30 of which were green. So, after I realized this green situation was here to stay I had to quickly order another load to ensure the green ones don’t run out. 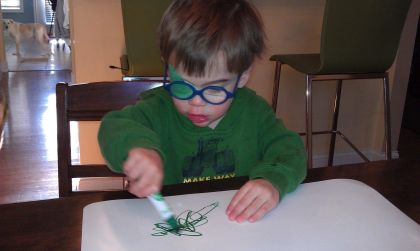 The green is pretty cute, don’t get me wrong. God forbid, he could be obsessed with the ugly yellow ones or the red ones that really look pink. I just prefer the blue ones, myself. He has blue eyes, blue glasses and a lot of blue clothes. The blue always look blue and they don’t smell funny like the green ones sometimes do.

As I was thinking about this today, I realized that I am A.)not complaining about the Eye & B.) focusing on something completely trivial that has zero meaning for anything. Who knew that one day we would be at this point?

I’ve said it before that I like the Acceptance stage. It is so much more relaxing than the pissed off/worried/overwhelmed/exhausted stage of the Eye. Having been firmly planted here for awhile I can say that I will be sad to leave it. I feel a new stage coming on and this one might be my favorite of all. (Until we get to the success stage, that is).

Right on the horizon is “Proud”. It’s sort of fast moving so I am pretty sure we will be caught up in it soon. Having time to actually focus on him instead of constantly re applying an eyepatch has given me such perspective into what an inspiring and cool little thing that he is. Don’t get me wrong, this was clearly realized the second the doctor sort of threw him at me, but it’s like a new level now.

I am so proud of Anderson. So proud of this kid who is just so awesome.

Every single day of his life begins the same way: patch/glasses. He will not know a day to wake up and just be able to sit down or walk in the other room for about 5 or 6 more years. Every now and then I let my mind drift to that place for just a second. A place without patches. It seems weird and fake. To me patches are a part of him, a part of us, a part of our world. Not in a bad way, just in a way like oxygen or water is. You know, vital and constant.

Anyway, back to the proud thing. Every day when I watch the blur of Anderson run laps around the house, I am amazed at how he doesn’t run into everything, how he knows SO much for a kid who basically is only working with one eye, how he can see the moon or an airplane in the sky with the bad eye, how he just roars like a monster at random people wherever we go, how he can answer the questions posed by Mickey & Dora even when his chair is slanted sideways and the one eye he has access to is partly hidden, which is really like seeing using 1/4 of an eye, how wide he can swing the left eye since he has discovered the benefits of peripheral vision. It’s like he knows he only has one eye to take in the world, so he better make the most of it. Or,even better, it’s like he doesn’t even know. To me, that is even cooler.

I am aware that he doesn’t completely realize what or why is happening to him all day, but he responds to it exactly how I hope he responds to life: curious, questioning, trusting, a little bit angry and always on the lookout for an opportunity. I used to think how easy life would be “if only”. IF ONLY he slept past 6am, took a nap, didn’t have ridiculously sensitive skin, ate something/anything, didn’t have to wear an eyepatch. Then, I settled on, IF ONLY he would leave the patch on. Oh, what a carefree vacation of a life existed in that fake world. But, that perspective business has made me see how BECAUSE OF is so much more important than IF ONLY.

Because of that darn eyepatch so many things are happening. He can have complete conversations with us and is so vocal it is a teeny bit overwhelming. Due to our constant stalking/distracting, he knows all of his letters, shapes, colors, construction equipment. I used to be angry at the stereotype of smart kids wearing glasses and now I realize that stereotypes do exist for a reason. He is pretty adept at using both hands which I think is because he uses his left hand when the patch is on because he can see it better. When the patch is off, he switches back to right. Being ambidextrous is a perk if I’ve ever seen one. And, the way he approaches the patch even gives me a bit of insight into who he is and who he will be. He is not someone who just accepts; he questions and voices his concern & reasoning (I don’t want to wear the eyepatch! Why do I have to wear eyepatch? You have glasses, but no eyepatch!). He trusts us, but still believes that he is right enough to put up a fight. But my favorite, is his ability to bargain and seek out opportunities. He will say, “I will wear my eyepatch and get a little bit of chocolate milk. Just one more time chocolate milk and I will keep the eypatch on.” It is hilarious. I know it is part of being 2, but I feel like I get more chances to laugh than most moms of 2 year olds.

I think the whole “green” thing is a way to at least have a little bit of control over the situation Sort of, I have to wear an eyepatch, but at least I get to pick the color. That, or the fact that he is 2 and 2 year olds have no logic.

So, here we are nestled on the border of Acceptance and Proud. I know some hard times are coming our way. Times of really intense questioning by him, the first time I have to let him stick up for himself when someone ridicules him, times of tears long after he is asleep as I worry about his first day of school as the Pirate of Kindergarten.

But, right now those things don’t really matter because I am so proud of this boy who is smart enough to know what matters in life-BECAUSE of the fact that he is smart, outspoken, funny and has chocolate milk, an eyepatch (green, or not) won’t matter.

3 responses to “Your stories: A Green One”