Georgina kindly shares the story of her daughter’s diagnosis and treatment of PHPV with us.  Many, many thanks! – Ann Z

I wanted to share our story and experiences of discovering that our little girl had something wrong with her eye – a condition called PHPV (Persistent Hyperplastic Primary Vitreous, also known as Persistent Fetal Vascular Syndrome or PFVS). I found I searched the internet until I was blue in the face (not that I think it does any good), and it was nice to hear of people that had been through the same or similar. 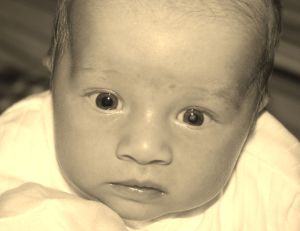 You can see the cloudiness in Evie’s left eye

It all began at Evie’s 8 week check, where the doctor noticed she did not have a red reflex in her left eye. Ok I thought, she has a perfectly good right eye so we can deal with this, as it was mentioned it may be a cataract. However, within hours I had received a call from the doctor himself, and we were seeing a specialist first thing the next morning. I wasn’t feeling so relaxed about it anymore – things don’t happen that quickly unless it’s serious in my mind. Luckily my husband could get the time off, and we went together, to be told that they thought it was possibly a birth defect which would dramatically affect her vision in that eye, if she had any at all, but that there was a chance it could be retinoblastoma (something you never wish to hear, cancer). My husband looked like he was going to collapse, but I don’t think it sank in immediately with myself. I knew nothing about the condition, so was slightly oblivious to what it could mean, but my husband had already been Googling things, so was far more in the picture than I was (I preferred my way, ignorance is bliss sometimes). It soon became apparent that this was serious as, within a matter of hours of returning home, The Royal London Hospital had been in touch to see how we were doing, and to arrange for Evie to go in and have further investigations in four days time.

So, on the following Monday, we left our little boy and travelled to London. We had an appointment with the specialist, who discussed with us what the following day would entail. At this point it almost seemed assumed that Evie did have retinoblastoma. The staff were fantastic and answered everything wonderfully. We went out for dinner, and actually had a rather lovely evening, including dinner and a walk along the Thames (funny how you deal with things).

I woke Evie to feed as she had to go four hours without (the bit I worried about most as she loved her food), but all went incredibly smoothly as she woke hours later, and only a little while before her general anaesthetic.

I took her down to surgery and held her, desperately trying to hold it together and not cry, but I challenge any one not to. Watching your baby being put to sleep is so heartbreaking. I think it’s the feeling of being utterly helpless even though I knew she was in the best place, and everyone was just wonderful. Whilst waiting for her to come back we had to have eye drops, as it can be hereditary, which took our mind off things, as I couldn’t see a thing and had to be guided to the restaurant and giggled trying to see what button I should press in the lift, or what was on the menu.

Finally I could get her, and we awaited the results of the investigations.  When I was told that it was a cataract (later to discover Evie’s condition was called PHPV, which is similar) I broke down. It must have been the sheer relief that after all of this she just had a dodgy eye. 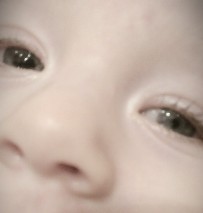 Evie’s pupil after her cataract surgery was teeny and did not dilate. She has since had pupilloplasty surgery to fix this but may still need to have another.

Evie’s pupil after her cataract surgery. She has had pupilloplasty surgery to fix this but may have to have another as they need to see into her eye to check her lense etc. As she can see it’s teenie in comparison to the other and does not dilate.

We were shortly referred to Great Ormond Street Hospital, where Evie has had two surgeries, and is likely to need a third, as her pupil has gone teeny as a result of the initial cataract operation. Luckily these operations were a success, and Evie now has a very swanky new lens in her left eye. The surgery was when she was 12 weeks old, and she was not fazed by it one bit.

Great Ormond Street Hospital is a very special place; it feels so upbeat, and it’s a very magical place to be. It can also make you realise that your little one really isn’t poorly at all in comparison to most of the children there. Although of course it’s still your baby and all you want in the world is for them to be ok.

I felt with Evie’s eye that she may not be able to see out of it, but at least it doesn’t cause her any pain or discomfort, and she doesn’t know any different anyway. Also, she could see the world and all its beauty, so if she was missing a fraction to her left it really wasn’t a big deal.

I wanted to share our story, really to let people know what happened after the surgery, as we were advised that it was unlikely she would regain her vision in that eye. After months of battling to get eye drops in, at times on an hourly basis (swaddling was the answer for us by the way), we finally  got her first pair of specs when Evie was 5 months, and we started patching on a daily basis with the aim to get to four hours a day. At first this seemed impossible, after 15 minutes she was beside herself, and seemed so scared and confused due to the lack of vision. 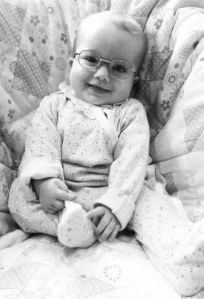 But here we are four months later from receiving those first specs, and we are comfortably managing four hours a day of patching (we find it works best to pop it on when she is having a nap). Her prescription has gone from +9 to +8, and it seems her little eye is likely to keep improving. It’s amazing seeing the difference – I set her little challenges, and the other day she picked up a 5p piece with her eye patched and NO glasses. I find this incredible. 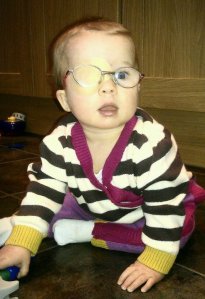 Evie in her patch and glasses at 8 months

Well there you have it, a not so brief version of Evie’s little eye adventure, but I wanted to share to offer any advice regarding patching, drops, etc. and to show people that it is actually ok, and she looks adorable in her little specs. They are part of her.