It’s long bothered me that some of the terms or phrases related to children’s vision are  inaccurate and sometimes even mean very different things, which leads to all sorts of confusion.  Here are the ones that I can think of, though I’m sure I’m missing others:

The one that trips me up the most is the word “squint.”  Until we started our journey with Zoe’s strabismus, I always thought squint meant having your eyes mostly closed, like you do when you’re in bright sunlight.  Turns out that squint is also a synonym for strabismus and having your eyes not in alignment.  This can lead to all sorts of misunderstandings when people talk about their child having a squint, or squinting to see something.  For instance, before realizing there were two definitions, at one of Zoe’s eye appointments, I tried bringing up the fact that Zoe squints one eye in the sun, that is, she closes one eye most of the way, leaving the other open.  Zoe’s ophthalomologist thought I meant that Zoe was crossing an eye whenever she was outside.  I now try to avoid this word altogether. 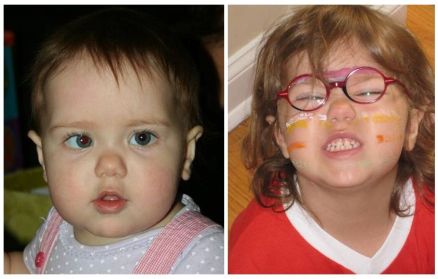 The phrase “lazy eye” is similar in that it can mean different things to different people.  I think most people in the eye care industry consider lazy eye to be a common phrase for amblyopia – when one or both eyes doesn’t see clearly even if it has no defects, or even if any refractive error is corrected with glasses or lenses.  Never mind that “lazy eye” doesn’t really accurately reflect what’s happening with amblyopia, since it has nothing to do with an eye being “lazy” and everything to do with the brain not paying attention to the visual input of the eye.  But beyond that complaint, a lot of people hear “lazy eye” and equate it with strabismus, since you see one eye focusing on an object and the other eye looking elsewhere (being lazy?).  And I’ve heard other people refer to ptosis (drooping of the upper eyelid) as a lazy eye, again, presumably because the droopy eye looks “lazier”.   Further confusing things is the fact that both of those conditions can lead to lazy eye or amblyopia, but they’re not the same thing, and the treatments can be very different. 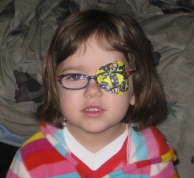 Related to treating lazy eye is the phrase that I find myself using a lot: “strengthening the weak eye”.  When a child patches the amblyopic eye, we often explain that they’re doing it to strengthen that eye.   In reality, though, we’re trying to get the brain to recognize the visual input from that eye, the eye itself isn’t being strengthened.  It’s misleading in a couple of ways.  First, when people hear “strengthen” they often think muscles, and I wonder if that adds to the confusion of thinking that lazy eye has to do with eye muscles and strabismus.  It can also lead to the misunderstanding that patching might make it so that the eye won’t need any correction any more if the patching is successful.  While patching can improve the visual acuity, if that eye needs glasses to see clearly, patching won’t fix that.

and on a much lighter note

Finally, on a lighter note, a reason to know the correct terminology for parts of glasses was posted over at Not Always Right (a blog about working with customers who aren’t always right).  I’d recommend using the term “temples” or “ear pieces” when talking about that part of glasses, not “legs”.

One response to “accurate terminology”